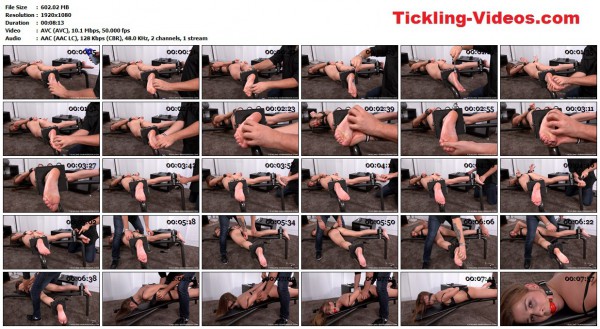 Show must go on! Mr. Tickler do turn Alexis sole up, undressed the nylon and oiled her bare feet. Seriously if you like M/F foot tickling, ticklish feet and hot girls, then this is the clip for you. His fingers work efficiently and tickle her bare feet. He tease Alexis’s bare feet also with pinwheel and hairbrush. Don’t miss this Czech beauty back! 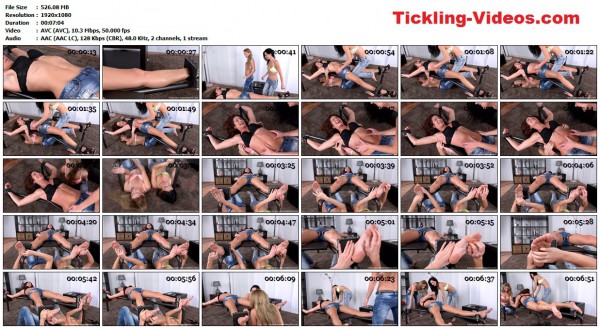 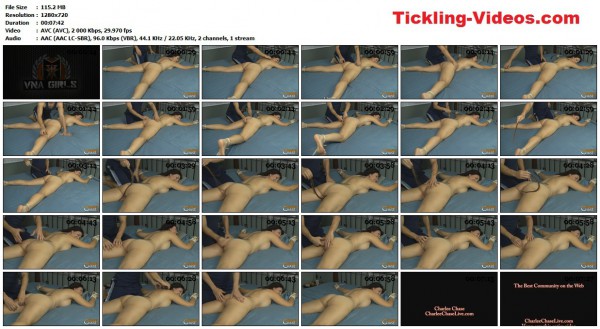 Charlee finds herself completely naked, face down on the bed with rope around her ankles and wrists, tied down, spread eagle. To begin, Elijah slowly tickle tortures down her backside with his fingers, starting up by her armpits and working his way down her back, against her ribs, across her sides, past her lower back and to her bare ass. Charlee finds this very ticklish! He tickles on top of her buttocks, under her butt cheeks, in between her butt crack, against her tailbone and all over her pussy, using his fingers and a long, soft feather. He spreads her butt cheeks and wiggles the tip of the feather near her asshole and against her bare privates as well as his fingers, probing at and circling her asshole while she's bound and helpless. He digs with his fingers under her butt cheeks and glides the feather in between her ass crack and along her wet vagina, making Charlee tighten and clench her butt muscles as she hysterically suffers in agony while also being turned on. He also tickles the backside of her legs, her hips and in between her inner thighs even getting some tickling in on her sexy bare soles. 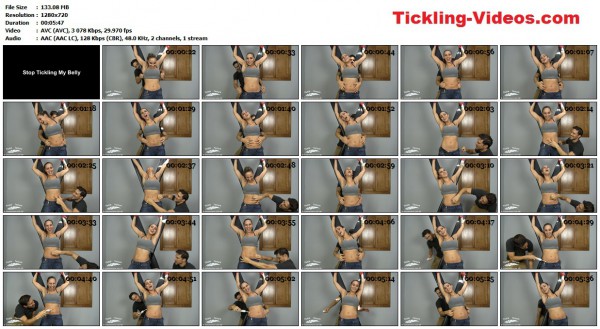 Finally, we get Sasha Fox back for more Tickle Torture!!!! She is absolutely one of our most favorite victims ever. She his young, hot, and thin with a tight body, and to top it off, she is insanely ticklish! Sasha is bound with her arms and feet stretched wide and cuffed to the standing X-frame wearing blue jeans and a tank top. Elijah lifts up her shirt and pulls down her pants below her hips, leaving her flat and tone stomach perfectly exposed for tickling. Elijah slowly and methodically tickle tortures her tummy, sides and belly button using his fingers, fingernails, Q-Tips, and an electric toothbrush. He really torments her good! She screams and begs "Stop tickling my belly!" Elijah lightly wiggles his fingers around her abs before fingering and tickling inside her gorgeous bare navel. He does the same with the Q-tips and toothbrush, teasing around her belly before tickling inside her belly button, which has her laughing, screaming and squirming hysterically as she suffers in agony. With the Q-Tips, he tries to fit as many as he can inside her belly button at once, driving her crazy. He also grabs, pokes, presses and pinches at her sides, groin and hips, and digs deep into her midsection, to keep her suffering in hysterics. Sasha is so much fun to tickle! This is a fantastic clip featuring one of our best victims ever and her beautiful bellybutton getting tickled. Don't miss out on this one. Add it to your collection today! 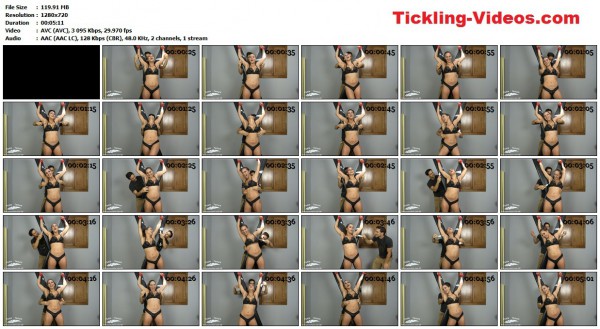 Sasha Fox is one of our most ticklish victims ever here at Tickle Torture. She's young, thin, beautiful, and to top it off, incredibly ticklish, especially on her armpits and ribs! Sasha is bound with her hands and feet cuffed to the standing X-Frame while wearing matching blue jeans and a bra. Her smooth, sexy armpits and ticklish, protruding ribs are perfectly exposed for tickling. Elijah wiggles his fingers down her arms and into her underarms. Sasha is immediately very ticklish, laughing, screaming and squirming in hysterics, with her boobs bouncing and jiggling almost out of her bra! She begs him to stop. But he continues on, tickling around her breasts, on her chest and against her ribs. He tickle tortures her using his fingers, long fingernails and an electric toothbrush. Regardless of where she's tickled, whether its armpits or ribs, with fingers or toothbrush, Sasha is easily kept suffering in constant laughter. This is another fantastic clip featuring one awesome hot victim! 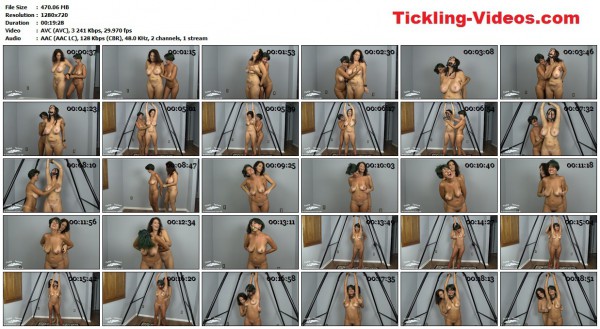 Charlee Chase is Brandon Areana's big sister. For the first scene, Brandon sneaks up on Charlee and grabs her. Both girls are completely naked. Brandon handcuffs Charlee's hands behind her back. She tickles Charlee because she's jealous of her goddess big boobs! Brandon tickle tortures Charlee all over her naked body, including her large breasts, armpits, chest, neck, ribs, sides, midsection and navel using only her fingers and long fingernails, keeping her laughing, screaming and squirming while suffering in hysterics. After a few minutes of listening to her screams, Brandon gags her with a harness ballgag in her mouth and over her face, and tickles her some more. When she's done, Brandon drags Charlee away. In the next scene, Charlee is bound with her arms stretched and cuffed above her head to the bondage stand. Brandon walks in and stands behind her. She tickle tortures Charlee's naked upper body slowly and methodically without mercy as she suffers hysterically in agony. She tickles her underarms, busty breasts, nipples, ribs, sides, tummy, bellybutton, crotch and pussy. She tells Charlee that she's gonna get what she deserves for stealing all her boyfriends with her giant boobs. Brandon also loves to tickle her big sister's giant boobs. Charlee can't stand it and vows to get revenge again. After a few minutes, Brandon places a harness ball gag in Charlee's mouth to muffle her cries. Despite being ballgagged, you can still hear her laugh as she gets tickled. Brandon leaves to go take a nap. When Brandon returns after her nap, all of a sudden, Charlee comes out of nowhere and attacks her, handcuffing her hands behind her back, and gets her revenge. Payback is a bitch! Charlee now tickles Brandon's naked body including her large, all natural breasts, underarms, ribs, sides, stomach, belly button, groin and hips. After a few minutes of tickling, Charlee does what her little sister did to her, she ballgags her then tickles her some more. When she's done, she drags her out of the room. In the final scene, Brandon is bound with her arms stretched and cuffed together above her head to the bondage stand so Charlee can tickle her for even more revenge! She tickles her upper body including her armpits, titties, nipples, ribs, midriff, abs and vagina. Charlee uses only her fingers and fingernails to masterfully tickle her while verbally teasing and taunting her little sister. Who's the boss, now! Charlee exclaims. Brandon is in constant laughter and apologizes, but Charlee's not hearing it. Meanwhile, Brandon's all natural boobs are wiggling, jiggling and bouncing all over the place. Charlee then muffles her screams by gagging her only to tickle her more. Brandon drools all over herself as a result of being tickled while gagged. After a couple minutes of tickling while gagged and drooling, Charlee walks off as Brandon screams and struggles in her bondage. 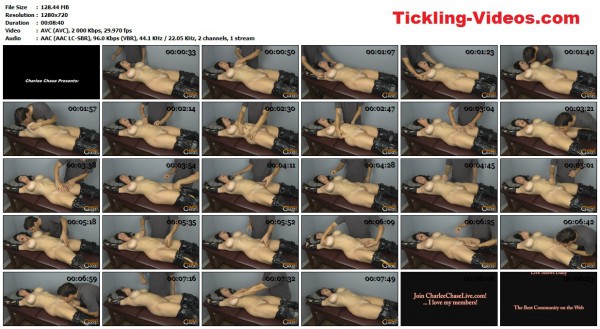 Elijah finally has Charlee Chase tied down completely naked to the bondage table. What does he plan to do to her while she is bound and helpless? What would you do? He begins by running his fingers over her sexy tummy, taunting and tickling her with his light touches. He wastes no time before diving deep into her armpits, wiggling his fingers all around as she desperately tries to avoid his ticklish attacks, squirming as much as she can but she having no place to go, leaving her big tits to bounce around and draw his attention toward. Elijah enjoys having this control over her and plans to take full advantage! He tickles all over her upper body with his fingers, her armpits, breasts, ribs, sides, tummy and even her pussy and thighs. He pulls out a feather to offer her a different ticklish sensation, but he has more planned for her still. He licks and sucks her big nipples, spreads her pussy lips wide and licks and sucks on her clit. What conflicting sensations Charlee is left with when Elijah licks her dripping wet pussy while tickling her at the same time, He slides a finger deep into her eager vagina, fingering her hard and deep while sucking her clit until she cums hard. While she's panting and trying to catch her breath from her explosive orgasm, Elijah continues his tickle torture attack on her body while she's overly sensitive post orgasm. 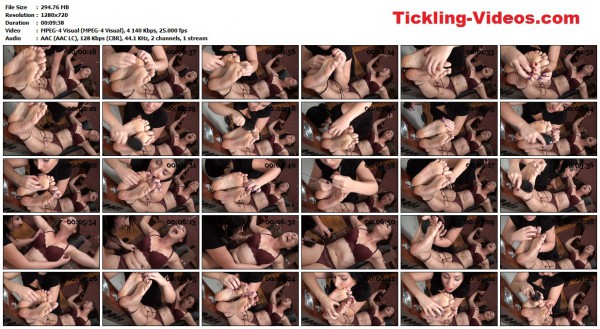 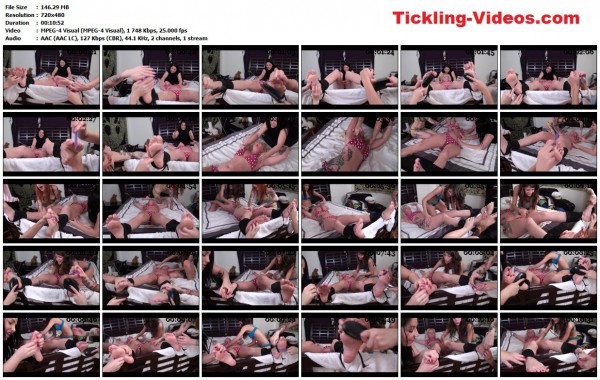 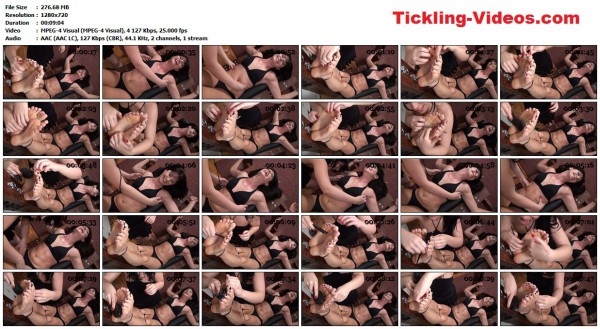