We bring you the outcome of our collaboration with the sensual MILF Mistress Kawa and sweet Liz Rainbow. Each of them has gone through the stocks and their malicious hands hungry for tickling the other. But if they thought this was over. They were wrong! For the first time in Spain Tickling we have just for your entertainment a pair of tasty feet nicely tied and ready to suffer the tickling out expect Tickler Josh has prepared for them.
Stay sharp because you are going to see our Tickler most naughty and playful side while he has the time of his life causing laughter in our fantastic Ticklees. Watch how they take part in his mind game and beg for the other to get Josh's attention.
In addition to this, if you like unexpected turns of events, at half of the video, Josh becomes the most envied man in the fetish world. Which he is more than than aware! We haven't said these two females' feet are tasty for nothing. Enjoy seeing how they take pleasure with a full-fledged worship. The revenge by Spain Tickling followers is here!! The most feared Mistress in Europe locks in the stocks the young Spanish porn actress Liz Rainbow. Liz has breathtaking and super sexy feet. Her sensitivity is incredible and she laughs like a little girl when the mistress makes her submit via terrible tickling.
"Revenge is best served cold". That is what madam Kawa says when she puts her poor victim in the stocks. She sure gets revenge, and how! This Tickled is ruthless. She works hard to make the poor actress cry of laughter, who looks at her with an expression of sadness and innocence while she is tickle-tortured! Her good-girl laughter will excite you like never before. Where we can see the porn actress Ana Marco gets revenge on Alana in the most merciless way possible. Ana is the perfect Tickler, because she's sensitive enough to know how to torture her victim in the most sensual and pitiless way you can ever find. She begins softly with her nails, she continues with her tongue, feasting on each corner of her skin, she goes on then with as brush, an electric toothbrush… And that's only for the soles of her feet! When it seems that Alana can't take it anymore, Ana attacks her torso despite her unavoidable begging. She has no mercy!! Ana can't resist trying her tummy and those tantalising armpits that she passionately licks in order to increase the volume of her Ticklee's laughter. Ana makes clear she's a born tickler and, by the happy and sadistic face she does, that she enjoys it. Here at Spain Tickling we have the pleasure to introduce you to a great porn actress who debuted on TV. Her passage though "HMYV" (an Spanish reality show) and how she slipped through the Goya awards didn't let us remain indifferent. As it won't when she leaves her footprint in the only tickling and foot fetish producer that exists in Spain.
Ana Marco is a young depraved 23 years old girl with little adorable feet. Probably the smallest that have ever came to us, with a 35 (USA 4).
In her first experience in the world of tickling and her first shooting on these grounds, she confesses being a fetishist of this! In her initial scene we'll see her seating in the stocks as a super sensitive Ticklee. So defenceless and naked at the mercy of the great Tickler Alana. We can see how she begs and laughs it out without hope. She even dares to claim she wants revenge! Alana uses the brushes without the least of concerns about breaking her and Ana, with a laughter as adorable as exciting, will turn you into fans at first sight!! Will Ana Marco get revenge on the Tickler Alana or, on the contrary, will she give up?
Thanks a lot for all the support given all around the world!! We specially want to mention all of the USA fans.
We'll try to keep up growing! Spain Tickling team is proud of bringing you the first video with plot in out collection! Its story is about the following: Nerea is a girl in need of a job, who doesn’t nowadays? However, the interview that awaits her is wierder than she imagined. At SpainTickling.inc, they don’t hire anyone, the candidates must be able to keep the company’s secrets. The enemies are everywhere! If Nerea wants to get the possition she will have to go through a drill, where an expert interrogator, our aquaintance DivJustice, will test her resolve After an initial contact with Carolina at the stocks and making sure her feet are very sensitive… We decided to play the banknote game, in this case two: one for each foot.Her goal is to manage them not falling while I tickle her with my fingers and various tools.Will she last? Or won't se be able to take it and they will fall brefore time's up?The prize is tempting…a nice massage on her sweet feet. But will she endure that long??? 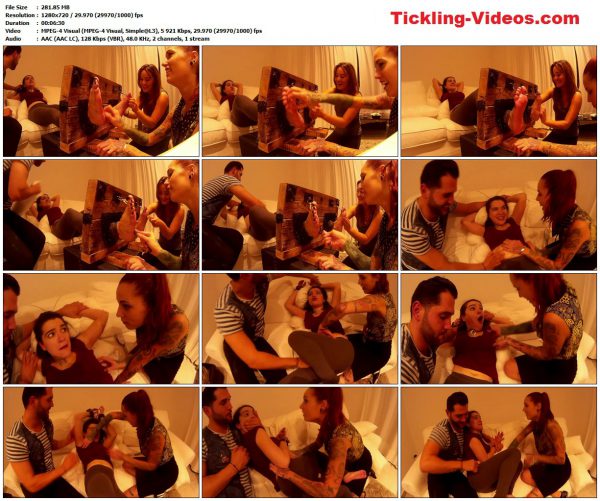 In this second part, Laura and Silvia continue with the game; without allowing for any respite to those feet so alluring for torturing.We'll see how they use many different objects to make Chiara laught, torturing her to infinity.Once the ordeal is done, Laura begins to worhip Chiara's feet and doesn't hesitate to nibble, kiss and lick them, overloading Chiara's mind; because at her remaining foot is Shilvia, her Mistress, tickling her.But that's not it, because Josh joins the party and grabs her close to deny any scape from her… 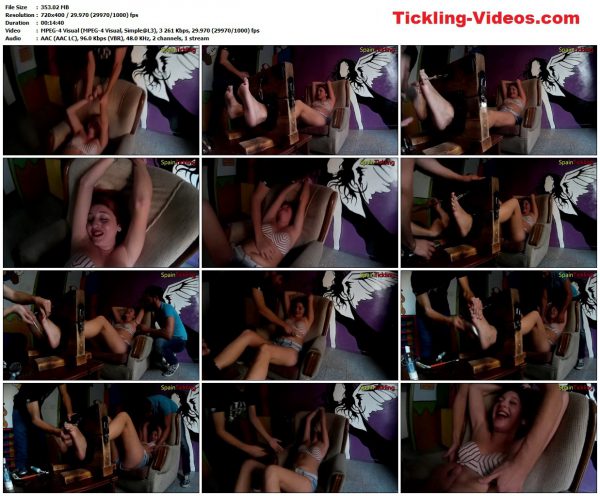 Here we got a new model, her name is Nerea and she is 20 years old. She is a bit shy and timid, but she does not hesitate into allowing us to be a evil with her.And by evil we mean it! This time, one of our Fanticklers helps us torturing her.She is wearing clothing a bit scanty, which helps us digging our fingers better all around her little body to make her suffer the most.Will she be able to endure being tickled by two guys? 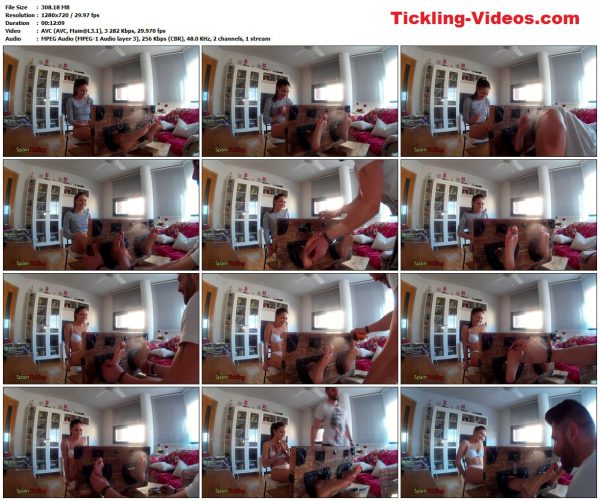